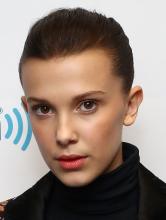 Friends at Wednesday night's Bible study may not recognize Justin Bieber, who just shaved off all his dirty blonde hair.

Only five months ago, he pledged “I’m going to grow my hair down to my toes.”

Bieber debuted his bald head in his Instagram Stories. He looks like a little kid. He could play Millie Bobby Brown’s stunt double as Eleven on Stranger Things.

He seemed pleased with the new look. However, his wife, Hailey Baldwin was not consulted. She came home thinking there was a strange man in the kitchen. After a moment of confusion, they hugged it out and Justin joined her on the set of Drop the Mic, which she hosts. (Daily Mail)

First major test of his marriage: How does Hailey react to the buzz cut?

She brought Bieber to her hair salon two months ago to trim his hair. And she made him shave his Joe Dirt mustache before exchanging vows.