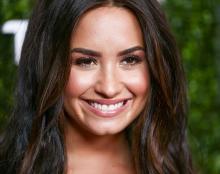 Demi Lovato just passed 90-days of sobriety. But she has another 90-days to go until doctors will discharge Demi from rehab.

A source said Demi will continue treatment on the East Coast until early January, possibly even longer, if her doctors conclude she’s not fully recovered from a near-fatal overdose.

A family friend revealed, (quote) “Demi knows she has a long road ahead. She has to stay sober for herself. Demi is thankful she’s still alive and is doing whatever she can to never get to that point again.” (Entertainment Tonight)

Unwrapping Christmas presents in rehab sounds depressing but if it's what she's got to do...

At that point, why not stay in through New Years Eve, though?