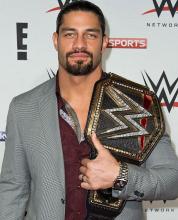 Roman Reigns must leave the wrestling ring for a bigger battle – against leukemia.

Pro wrestling is 100 percent scripted. However, reality hit Roman Reigns a second time. Fighting back tears, the title-holder shocked Monday night's WWE Raw crowd (quote) “I’ve been living with leukemia for 11 years. Because the leukemia is back, I’m going to have to relinquish the universal championship.”

His first diagnosis happened when he was only 22 years old. Now it’s relapsed and the prognosis does not look good. Typically, cancer returns more aggressively. But Roman Reigns declared (quote) “This is by no means a retirement speech. I will beat this. I will be back.” (TMZ)