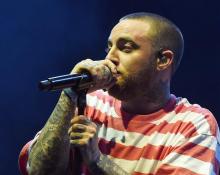 She has yet to comment about their failed engagement. But she’s paid tribute again to her ex-boyfriend, rapper Mac Miller. She shared on Instagram Story a video of Mac getting dressed for an after-party at this year’s Oscars. Standing at his feet is Mac’s Pitbull mix named Myron. Ariana adopted Myron following Mac’s surprise overdose.

Mac looks slightly uncomfortable dressed in a tuxedo and bow-tie. His team fusses with the sleeves of his jacket. Then Mac turns to look at Ariana. All the tension lifts from his face and he smiles at her. Pure affection.

On Halloween night, friends will gather in Los Angeles to celebrate Mac Miller’s life. Ariana’s followers hold out hope that she makes a surprise appearance. A source said, (quote) “Ever since Mac passed, she has been avoiding the grieving process and has been trying to keep herself insanely busy.” (Entertainment Tonight)