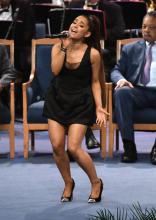 Ariana Grande wants to cover up memories of Pete Davidson – at least temporarily.

Sharp-eyed spies noticed a Band-Aid on Ari's ring finger -- covering up a tattoo of her ex-fiancé's name -- at Tuesday's taping of NBC's A Very Wicked Halloween musical special.

Pete, of course, went to more drastic measures. He had a tattoo of the bunny ears Ariana famously sported changed to a black heart -- a sign of trouble in their too-much, too-soon relationship even before their split was officially announced.

The fact that Ari only used a Band Aid should give Pete some hope.