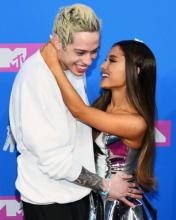 Reality finally set in for Ariana Grande, who split from fiancé Pete Davidson. The decision was supposedly mutual, but it’s not as if Pete had a choice. He immediately deactivated his social media accounts. That tells the tale.

Out of courtesy, Ariana will give back the $100,000 diamond engagement ring.

After four months together, the whirlwind relationship fell back to earth. One of her team members confirmed, (quote) “It’s not shocking to anyone. It was way too much too soon.”

TMZ reported the couple called it quits over the weekend. Ariana canceled a charity appearance at the last minute, while Pete Davidson carried on with Saturday Night Live.

She’s scheduled to perform in two weeks at the NBC special concert A Very Wicked Halloween: Celebrating 15 Years on Broadway. But don't hold your breath that she'll keep this commitment.