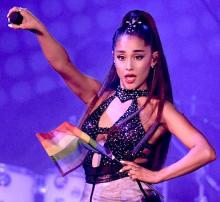 On Wednesday, Ari released the three-minute video to “Breathin’.” It features the piglet named Piggy Smallz (aka Notorious P.I.G.). Ariana recorded a 30-second clip of the little oinker wandering on her bed spread. The clip loops throughout the video as Piggy Smallz smacks its pig gums and sniffs around her phone. It looks absolutely adorable.

Last week, her fans thought Ariana might be pregnant with fiancé Pete Davidson. A mirror selfie posted to Instagram revealed in the background a baby crib in her New York City townhouse. Ari denied the pregnancy rumor and told her followers that Piggy Smallz sleeps in the playpen. (E! News)