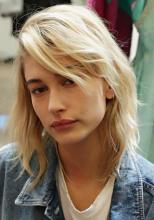 TMZ finally admitted this morning that People magazine “got it right.” They reported from the start that Justin Bieber and Hailey Baldwin exchanged vows in a New York City courthouse. Then honeymooned in Europe for 10 days.

TMZ has fresh details from the elopement. One of Justin’s friends, Josh Mehl, witnessed the ceremony. Justin brought along a minister, too. His name is Jeffrey Quinn. He’s on the faculty of a college near the courthouse.

So Hailey got hitched without a pre-nup. Even though Justin’s team pleaded with him to get that agreement on paper before exchanging vows. Instead, Hailey and Justin are working on a “post-nup.”

Over the weekend, the newlyweds visited the Bieber Museum at his hometown. Justin introduced fans and guests to Hailey and called her “my wife.” (Calgary Herald)